Join the Disciples & be a part of the Lenten Drama

Think of “Passion Plays” and what comes to mind? Oberammergau, perhaps? Medieval pageant wagons, with slightly anachronistic costuming and beeswax candles for lighting?

The Wesley Grove play originated in 1977 under Rev. Tom Connar. Originally, its purpose was simply to reenact the events of the Last Supper. In ensuing years, the reenactments have evolved, becoming hour-long accounts of the events of Holy Week with some hard-hitting themes. The Wesley Grove Disciples have examined such topics as sin and forgiveness, the nature of servanthood in the Christian life, Christ’s sacrifice on behalf of guilt-ridden individuals, and the change of spiritual perspective involved in the New Birth. They present their plays to various groups during Lent, and finish with their own church’s Maundy Thursday service.

Characters from the Gospels come alive through very human characterizations. When was the last time you thought of Jairus’ response to the astounding miracle of receiving back a child he thought dead? When was the last time you imagined James and John with the tempers which earned them the nickname “Sons of Thunder”? While being careful not to ascribe twentieth-century personalities to first-century individuals, scripts have nevertheless endeavored to show that human nature has not changed substantially in two millennia, and that the Gospel truths are very relevant today. 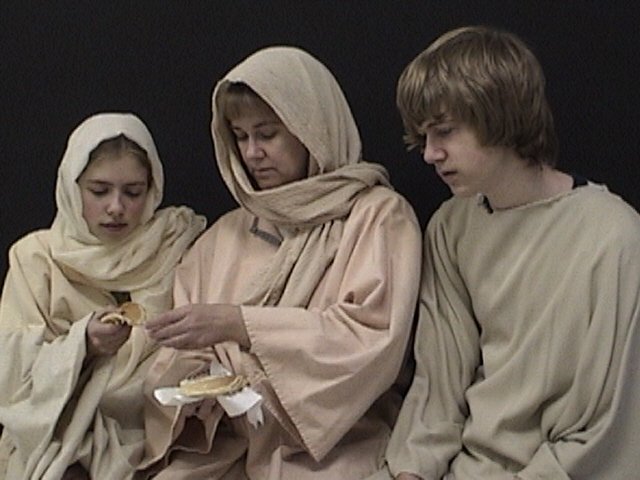 The Disciples strive for a level of professionalism, which has impressed their audiences and gained them several yearly return engagements. Scenery is simple, to meet the demands of portability. Custom-made screens mask the elaborateness of church sanctuaries, and help to “transport” the audience back to the time of Christ. Members of the congregation make the costumes, which have evolved over the years from simple bathrobe-and-towel combinations to more detailed articles.

To the Disciples, a production is a success if it affects people in a positive spiritual way. They delight in putting their special personalities into each role they play. Jim Radtke made a splash two years in a row portraying an especially-loud and boisterous James “Son of Thunder” Zebedee, who admits that his “temper never served anyone. Now [he] serve[s] a Risen Lord.”

One man, reeling from a divorce, was cajoled into taking a small part, and found the Disciples’ love and support so tangible that he not only came back the next year but requested a bigger role! Kathy Harris came to drop off her daughter for the first rehearsal of 1994 and, within minutes, found herself accepting the part of her daughter’s character’s mother. One anonymous visitor to Wesley Grove’s Maundy Thursday observance commented, “Yours is a real worship service, not a production.”

As long as people continue to feel the movement of the Spirit in what they do, the Disciples will “tread the boards” with the Good News of the Gospel.

WELCOME TO YOUR SPIRITUAL HOME

Our Mission
Wesley Grove shares the love of Christ through worship, education, and outreach.

Our Vision
Bring people to Christ.